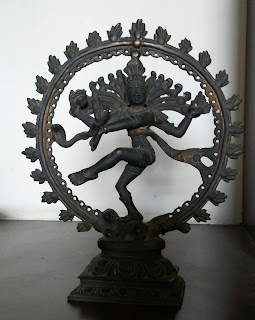 Last night, my older one sat me down to explain the principle behind the idol of Lord Nataraja and why it is present in CERN, as told to her by her Tamil teacher. Since I am a dancer, he wanted her to explain it to me.

Though I decided I will blog about it, it slipped my mind this morning. But a speech I saw by Sri Narendra Modi on feeling pride in Indian technology and how idols and statues code some of them symbolically, reminded me of this.

Read more »
Posted by Meera at 12:48 AM No comments: Links to this post

The Beginning is the End

Cosmos heaved. Every cell vibrated. And pulsated with a desire for a life of its own. To swim on its own, to move as it wished, where it willed, not to be trapped, not to be part of a whole but become a whole.

And it got its wish.

If only to live without this fear. To be strong. As the jaws closed on it, it's last wish was to be the predator and not the hunted.

A lion. Swimming without fear. Killing with impunity. Power. The king of the jungle. The world at its mercy. And yet, powerless against the tusks that bored, the horns that stabbed, age that withered.

To be stronger still. To be invincible. To conquer uncertainties.

Swimming. Flying. Climbing. Digging. Destroying everything on its path.

It wanted to be god - the creator, the preserver, the destroyer.

It did all that. And yet, it was created, it had to be preserved, it could be destroyed.

Not on its own. It could never become that which it wanted.

It cried, "Please let me become you." It begged.

Had it been dreaming all this while? Did it really happen?

The Cosmos heaved. It settled deeply and sighed in contentment.

Posted by Meera at 11:47 PM No comments: Links to this post