Rathna walked back to her seat with a glow on her face that was difficult to miss. She had won the best scriptwriter award this year - the best debut.

She accepted the congratulations gracefully, even looked at the other nominees and smiled. Didn't she know what it felt like to be rejected? Her own hurt was still fresh, though it had happened many years back.

She had been so hopeful of getting through the premium engineering institution that she had let her board marks slip just a bit... Not that she had a say in the matter, but that's how it had panned out. "Such an intelligent girl! She will get it definitely!" Didn't everyone encourage her with these words? And then she had missed it.

Of course, she should have guessed the result even on completing the entrance exam, but she had held on to hope. Not getting through was bad enough, but when she applied in other colleges, she was not given admission in BSc Math! Physics, Chemistry, Bio... no luck... Sorry... No vacancy!

She couldn't show her face anywhere. She kept trying, hoping for last minute admission. She kept track of when there was a vacancy in any of the BSc streams, but there always seemed to be one more candidate to fit the bill.

The first six months of her first year BA History was spent in pursuing a BSc seat, with all her neighbours and friends assuring her - "Just wait. I have told my friend, who knows someone who knows the principal. Something is bound to happen." Suddenly, it was not about her capability, but that of the acquaintance's in being able to pull off a favour.

How miserable she had been. And then, after six months, she had to swallow the bitter pill of disappointment. "Too late ma, we should have gone to them earlier..." the rest told her regretfully...

She had settled with difficulty and just scraped through in first year. Years 2 and 3 weren't so bad as she made friends and even started enjoying history.

So much so that she wrote a historical play on Chanakya - creating a character like him for modern times. And that had gone on to win critical recognition among the playwrights and theatre personalities. Then was made into a movie. Five years after the debacle of being rejected for BSc, she felt vindicated.

She was capable. So what if it was not in getting admission into science? Her star was meant to shine elsewhere.

Now, she knew, there was no looking back as new ideas squirmed in her head, bursting to emerge into full-fledged plays.

Posted by Meera at 9:23 PM No comments: Links to this post

It was a weekend of water and birds. Though the birds seem to have gone back and could be seen only in small numbers, just being next to the calm waters, wooded banks and amidst the birds was very relaxing.

Children did get a bit fed up. "Not the same birds again!" they exclaimed... But as the sun started setting, there was much excitement and laughter. The good roads made driving a pleasure in itself. 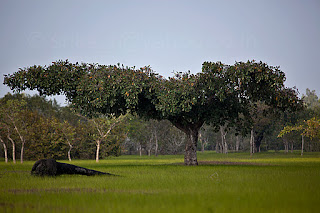 And then we found the lake with green grass that seemed like a haven away from the bustling city life. Except for the three men who seemed intent on having a drink party in the middle of the afternoon. Though they were quiet, we probably spoiled their mood by going there out of the blue at a time when no one was expected.

Surprisingly, one of the children also felt scared of all the water and wanted to be carried uncharacteristically! But at another spot on the way back home, he managed to perk up and enjoy watching the birds through the binoculars.

What is it about the water that calms one so! The gentle breeze made me wish I could picnic there, thus enjoying the setting a bit more.

More importantly, I am so glad to have journeyed to these places. Calm is never very far if we take the trouble to get away from our routines. It was also heartening to note that there are places where nature still has a sway.
Posted by Meera at 5:40 AM No comments: Links to this post