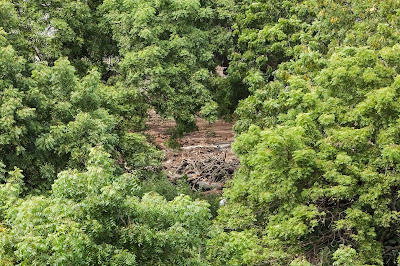 When I moved in to my current house 10 years ago, the adjoining campus - the backyard of the veterinary university off Mount Road - looked green. It had a rich fauna and flora. I woke up to the sound of deer clashing in friendly matches, kingfisher declaring its presence, woodpecker pecking away, treepie shouting 'cooollldrinks', snakes slithering around and parakeets protesting against its presence. 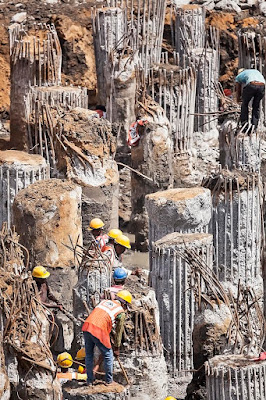 Today, it is barren as the trees have been cut to make way for the metro office. Though a PIL put a limit to how many trees can be cut, who is keeping track? Yesterday, a peepal tree was cut. The deer were relocated to another venue a couple of years ago. Birds come, but are less in number. God knows where the snake vanished to.

What price development, I wonder.

I know the land I live in also must have been a forest once upon a time. In the immediate past, though, a slum occupied this space.

It pains to think of the havoc man is creating in this world. Delhi apparently is covered by a thick smog, so much that people have been advised to stay indoors. Is Chennai going to go the same way?

What can we as individuals do to reduce the destruction of our environment? Invest in land less? Worry about the future less? Reduce our consumption of material things?

Time to think is past. It is time to act now.
Posted by Meera at 3:31 AM No comments: Links to this post