Dobie and Me: Chapter 5

The day saw me busy cancelling all my plans for the next few days. I didn’t think I could enjoy when Dobie looked so miserable. A few friends who also loved Dobie dropped in and cheered him immensely. And me, of course. It hurt, I could see that. And he moaned a bit. It was with great difficulty he had even liquids. His face between his paws, he was a picture of misery. Oh my poor baby!
Read more »
Posted by Meera at 9:14 AM 2 comments: Links to this post

Some Old and New Memories


It was with great apprehension we planned a trip to Delhi and neighbouring cities. Having got used to the hot, hotter and hottest weather of Chennai, having not enough warm clothes even to face the colder temperature, we debated hotly on the need to make the trip. But two school reunions seemed compelling enough to take the risk. 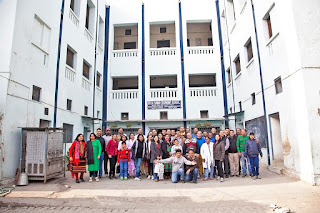 Had I continued to live in Delhi, studied in the same school till the end, would I have felt the same way as I did now, about meeting my friends from '86?

I don't know and this line of thought has to be abandoned as speculation that cannot be proved
conclusively. I did leave the first school I studied in half way, and I was immensely thrilled to be reconnecting with my old friends - and even those I had never met in school for they joined later, or our paths seldom crossed even when they were there.