Naadvaibhavam - a musical program by 5000 singers, organised by the Art of Living in Chennai. My mother and mother-in-law were participating as singers. Srikant would be there, of course. My father and father-in-law too. I opted out. Managing two children in an expected crowd of 1 lakh would be a challenge. But as the day approached, I wondered...other young children were participating. Shouldn't my daughter at least witness it? The ambience, energy, the experience...

I decided, and was relieved when a neighbour, Anubha, also expressed interest to come.

Then started the worries from the family. "Are you going to drive that distance? Traffic will be horrible! Parking, impossible!"

The adventurous spirit raised its head in hope. Kids would love the train. I have company, and my kids are comfortable with her. She is a mother herself...why not.

We did it - took the local train. It wasn't easy since there is no station nearby. We took a train that terminated a station before my destination, so we had to change platforms, trains. Then cross at the level crossing - no overbridge.

When we returned, there was the negotiation with the auto that ended horribly.

But, what I remember and cherish is just the journey back, the cool night breeze as the train speeded, the strangers - women - around, and yet the smile that women share so easily. My daughter sat on some lady's lap near the window though there was enough space around. And though Anubha and I walk every evening in our complex, just sitting down and chatting - transported me back to my college days when we were not bogged down by any cares.

Not that I have cares - but there is always the rush to reach a point and get back home, dinner and lunch to be cooked, kids to be minded...some deadline to be met, or just sometime in front of Facebook...

In the train, with the engine driver worrying about driving the train, no traffic or pollution around, I longed for another such evening to come.

My holidays are usually paccckkked. But in Mirvana resort, 55 kilometers from Jaisalmer, even in September, the heat compelled us to be indoors - in-tents. And then the long drive to ride the camel on the dunes...the camel cart ride another day to a village. Such leisure and peace...with just the farms and the greenery around us (for a desert state, there was much too much greenery last september)...Those are the moments that linger in the mind.

Posted by Meera at 9:19 PM No comments: Links to this post

Email ThisBlogThis!Share to TwitterShare to FacebookShare to Pinterest
Labels: Leisure

The Sound of Music 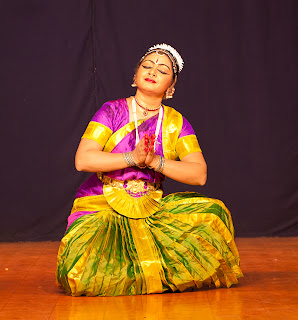 Last program sometime in August had been a crash one - with just 3 weeks to practice, learn a new varnam and get on stage. When my legs stiffened, my mind blanked out on what next. Thanks to Crocin, got on stage. But what made me confident of dancing was the opening invocation that the musicians played out. Just closing my eyes and letting that music soak me was enough to forget all earthly bonds and physical limitations. The last mile didn't seem such a challenge.

Last evening, the tension was no less. My old enemy, a catch in the back, caught me just as I was leaving for orchestra rehearsal day before yesterday. Myospaz to the rescue, and I at least practiced in a way that gave me confidence.

But on stage, the tension is different. You cannot relax as you can even on the penultimate day. No water breaks, no phones to distract, no gossip in between to rest your legs.

But what you have is the ambience of the auditorium, the very personal space you can create and the music - nothing but music.

As the Violin, Mrdangam and the vocal come together to start the invocation, the dim lit auditorium and the darkened wings where I wait...with the spot on Lord Nataraja in the front left of the stage...I can't see him, but can imagine him there, with flowers around, a lamp and some incense stick. They are enough to transport me to another space.

That is the moment the magic happens, the soul connects with the one supereme and forgets what the body can or cannot do.

As the program progresses, the throat does dry up, the body does beg to relax. But in between the items, the violinist plays a tune. Just let that music soak me again, and I am back, ready to see the evening through.

What better healer than music?

The Silence of the Geese 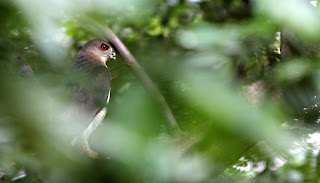 One of the first concerns we had when we moved to the current apartment complex - aptly called The Nest (as we later discovered) - was the noise the geese made. Geese? The complex shares a wall with the TN veterinary research institute and houses geese, and poultry of other forms. My husband Srikant's concern was that they would make noise and disturb sleep. But, it just became part of our background music since 2006.

In the last two years, we have paid greater attention to this neighbour. We first discovered a crow's nest very close to our balcony. While watching them, we became aware of other birds - parrots, white migratory birds, kingfisher, woodpecker...

Maybe because children need us less, my husband and I stand in the kitchen wash area that overlooks the institute grounds and spend long hours gazing at the varied birds and the animals that we see there. Deer, snakes, mongoose, squirrels, birds of all types (http://www.facebook.com/album.php?id=1161404038&aid=2043683).

Treepie was a completely new variety for us. Then recently, we saw very tiny green birds that live inside branches. Yesterday, we saw sparrows - which have become a rarity in Chennai. And while clicking what we thought was the smaller variety of sparrows, we found a bird of a new kind! Honeysuckle, maybe.

My heart bleeds. What will happen to the deer? We see samples of so many bird varieties - will they abandon us? Where will the snakes find ground for cover? Will the eagles hover lower anymore?

I try to tell myself - when Nest was being constructed, maybe these brids had taken fright. But as the dust settled they returned. So will they return once the metro rail construction is over. I hope they have enough trees to return to.
Posted by Meera at 10:33 PM 2 comments: Links to this post