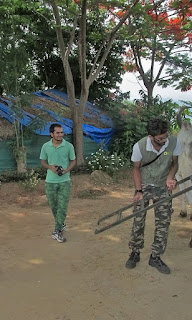 We reached Koodalur in the foothills of Kumily Hills near Thekkady for a bullock cart ride around the fields, looking for birds of different feathers. Two youth were waiting with cameras taking photos already. We got on to the cart and one of the boys enthusiastically pointed out the different birds flying around. It was his uncle's cart and he had already done the rounds of the farms earlier. He had seen 105 birds on an earlier trip, he said with pride.

As always, I started chatting up. The two men were from Mumbai, where they worked with Bhavan's rescuing snakes and spreading awareness about the need to protect snakes. "People used to kill snakes out of fear and I felt it was wrong so I joined Bhavan's which had started rescuing snakes," said Prabhu, a Tamilian who was born and brought up in Mumbai. His friend Hemant, was a Maharashtrian, and both worked in the same place. They had been working non stop for the last two or three years and so they were on a 15 day or one month vacation, going to different places in Tamil Nadu and maybe unintentionally focusing on the fauna around. They told us about the birds they had spotted in Kodai and Meghamalai, apart from Kudalur, of course. 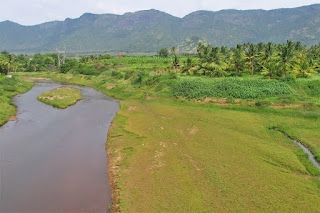 "How did you get into snake rescue?" I asked. 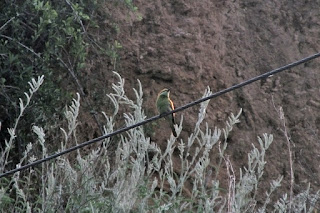 I was stunned to hear that the two boys had done engineering, one of them in IT and the other in Civil. But as they matured into youth (they must have been in their early 20s), they were slowly drawn into rescuing the snakes, and their career path changed. They draw a salary, which they are happy with. They also do other work, but all around rescuing animals or working with children creating awareness about the need to protect the environment.

"How did your parents agree?" I asked.

"They were upset initially, but then they agreed," Prabhu, the outspoken one, said. I admired the parents who endorsed their sons' decision and are supportive. Maybe they had fights about the money spent on engineering education, but they came around and accepted it.

While going around the fields, I saw several kinds of birds and I learnt that mynah, owls and parakeets have their nests in coconut trees. I saw bee-eaters in certain kinds of fields, while some other birds preferred a different kind of greenery. They previous day, during a nature trail through Thekkady forest, the guide - a tribal whom the government had trained to be a naturalist and guide - told us about one kind of parakeets that went only for banana plantation. They had become rare to sight in between because banana cultivation had come down. But now again there was a revival it seems. 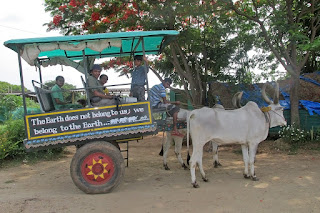 I was reminded of a story I had heard when working on a dance-play on bees - that bees in China were vanishing . I wondered if the farmers in the surroundings appreciated the rare birds that they sighted regularly. I wondered, when we cut forests to plant a particular kind of plant/crop, what happened to the birds that depended on those trees. When we replant in a different locations (if at all we do), then do we consider the need for variety? Because we cannot know which plant houses which bird and what will happen to a species if 'useless' trees are cut.

With these thoughts came the constant struggle between man and nature. Ironically, it is only men who can fight other men who destroy nature. And there will always be a conflict.

Meanwhile, we can only hope that more and more Prabhus and Hemants are created so that at some point, we can hope for the natural order to be restored.

Posted by Meera at 11:12 AM No comments: Links to this post